But can he run a country?

But can he run a country?

But can he run a country?
Posted on January 27, 2017 in John's reflections, Leadership 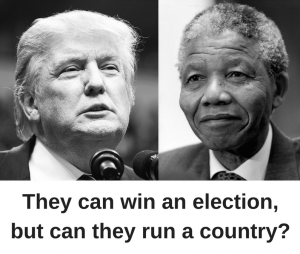 There is a scene near the beginning of the movie Invictus in which a newly-elected President Nelson Mandela leaves home for his morning walk, accompanied by two of his bodyguards.As the three men stride briskly through the empty, pre-dawn streets, Mr Mandela’s protectors scan the surroundings nervously, conscious of the danger for the first black leader of their deeply troubled, divided nation.

Suddenly, a van speeds up behind them, breaking the tranquility of the moment. Noticeably startled, the bodyguards move quickly to shield the president. Then, the vehicle screeches to an abrupt stop, and the driver throws a package of newspapers onto the sidewalk.

Visibly relieved that the incident had posed no threat, the bodyguards look to the pile of papers, noticing the bold print in Afrikaans, the language of most white South Africans. They turn to the new president—who had mastered this language during his many years in prison on Robben Island—and ask what the headline means. Mandela translates: “He can win an election. But can he run a country?”

One of the two men charged with the president’s security was indignant: “Not even one day on the job”, he exclaimed angrily, “and they are already after you.” Nelson Mandela, though, was unfazed, and he commented calmly: “It is a legitimate question.”

When I reflected this week on the still surprising election results of November 8, and the impending inauguration of President Trump, the scene from Invictus came to mind. Certainly, on the eve of Donald Trump’s ascension to his nation’s top office, much of the world is indeed wondering, “Can he run a country?”

Please do not take my observations as a defense of Trump, or as any sort of advocacy for him. In addressing such a topic today, I do not mean to say, or even imply, that there are a vast number of viable comparisons between Mandela and Trump.

In fact, the two have vastly different—in many ways even opposite—histories, personalities, philosophies, life experiences, and styles. For example, President Nelson Mandela was humble, unflappable and reflective. Thus far, Donald Trump has shown himself to be authoritarian, narcissistic, irascible, and impulsive. And, that is just the beginning. One could go on at length about the number of differences in the character and demeanor of the two men.

At the same time, there are some noteworthy parallels between the situations the two individuals faced upon coming to power. Each of them had tapped into vast troves of emotion among the electorate, creating popular movements that swept them to electoral victory. Thus, both men proved astute at navigating the electoral process. For each of them, as well, the question is legitimate and supremely relevant: Indeed, can he run a country?

Each leader came to the office as an outsider to the “system”. Neither had ever held political office or run a governmental organization. Mandela and Trump were both new to the pressures of having to answer to the public at large, which is a far different matter than motivating supporters and winning an election.

Both Mandela and Trump were seen by many people as threats to the established order. As such, each began his mandate with significant portions of the population, and in particular much of the nation’s elite, in opposition to virtually everything they represent. We forget today that for white South Africans, Nelson Mandela was not a freedom fighter but a dangerous terrorist.

In hindsight, nearly all would agree that Mandela’s presidency was a resounding success for his nation, and for the world. Nowadays, we tend to forget how much his rise to power was beyond controversial; it was greeted with anger, resentment and skepticism by the nation’s whites. Much like Trump in the United States today, Mandela symbolized the end of their world for a large and influential segment of the nation’s population.

Nobody knew quite what to expect from the presidency of Nelson Mandela, a man whose rise to power engendered fear in the hearts of his white countrymen. In the end, though, things worked out okay—even very well, one might say.

Today, the prospect of a Donald Trump administration strikes fear in the hearts of many of his fellow citizens, particularly Democrats. While I see it as a time of exceptional uncertainty, I choose to remain optimistic. Just as with Nelson Mandela in South Africa, there is a chance that it might all work out okay. At least, we can cross our fingers and hope.