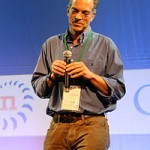 I have not written a post here for a while, so I would like to begin by expressing thanks to the team of people who have been working on this blog for the past few weeks—Esther, Eduardo, Claire and Birgit, along with everyone else who has suggested ideas or made comments.  Since much of my time recently has been consumed by travel and writing, they have done a great job of keeping the blog alive.  And, I must say that I have been following their work with great interest.

As I free more time in the coming months, I plan to take an active role again on the blog.  At the same time, I would like to keep a group of people involved.  It is my desire that several members of our team will continue to write on an ongoing basis, along with some of our students, friends and other guests.

In the meantime, I continue to work away on the next book—on email, social marketing and storytelling—and we still plan to have it in print by year end.  I have also been doing quite a lot of teaching and public speaking, which leads me to the subject of this blog entry.

In the past few weeks, I have made presentations at the European Email Marketing Conference in London and at Digital Marketing First in Brussels.  At both shows, I was reminded of the rapid evolution of e-marketing that I have witnessed in the past 12 months.

When I began speaking at this type of event in early 2010, around the theme of how to use the power of storytelling in email and digital media, many audiences were intrigued and at the same time somewhat perplexed.  The concept of telling a story with electronic media seemed a bit strange to most people.  Email was seen as a sales channel.  Social media was perceived as an interesting phenomenon, but companies were struggling with how to use it to increase revenue.   The question of how one might use Facebook as a medium for telling a story was far from people’s minds.

Speaking in Brussels and London, and listening to the other presenters at these two venues, left me with the distinct impression that the mindset and the vocabulary of e-commerce are beginning to change.  Far more than in the past, speakers and attendees were talking of “creating conversations”, of “telling one’s stories”, or of “engaging a user community”.

What is my conclusion?  Quite simply, there is a growing understanding today of the fact that the internet—email and social media—can become far more than channels for selling.  Rather than simply blasting out marketing and promotional messages, we can learn to use these channels to listen as well as speak, to have true conversations with our target audience, to engage and maintain a community.

Of course, I was also encouraged to realize that awareness of storytelling has increased dramatically in 2010.  I do not want to get too enthusiastic or overestimate the importance this trend, as I still do not see a great many companies using story effectively in their email newsletters or on their social media pages.  What I do see, however, is that many are coming to understand the power and value of a good story for engaging their followers and prospects. Some of these companies will be cited as examples in the forthcoming book.

The growing awareness of storytelling is an interesting first step.  Perhaps 2011 will indeed be the year of the story in e-commerce.