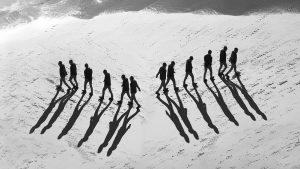 Continuing on the theme of our last post, how would I have advised Mr Biden to use the setting of the Lincoln Memorial to his advantage?

As we observed previously, President Lincoln is a rare figure in American history—an image of unity and inclusion admired by Republicans and Democrats alike. In this vein, Joe Biden could have stood before the majestic memorial to such a legendary leader and invoked examples from both Mr Lincoln’s words and his actions.

If the current US president truly seeks to show that bipartisanship remains possible today, he could readily refer to some of Lincoln’s most famous quotes. Below are two quick examples that come to mind.

The first illustration comes from the great Civil War of the early 1860s. When this emerging conflict pitted two fiercely divergent factions of Americans against each other, President Lincoln championed unity, declaring that “a nation divided against itself can not stand”.

Had I been involved in planning Mr Biden’s speech at the Lincoln Memorial, I would have encouraged him to use these very same words.

For example, he might have declared: “Nearly two centuries ago, one of our true national heroes taught us a critical lesson, that a nation divided against itself can not stand. Today, political polarization has created an environment of unprecedented acrimony. In my view, this climate of divisiveness is both destructive and untenable. It does indeed feel like we are becoming a people divided against ourselves. Philosophically, this split threatens our country every bit as much as the horrific war that tore us apart during the presidency of Abraham Lincoln.”

My second set of words Mr Biden could have used well comes from the conclusion of the same war, in 1865. As the conflict between Unionists and Confederates gave way to peace, Lincoln proclaimed that America’s “better angels” had prevailed. Once again, I see this celebrated phrase as one that could aid Joe Biden in his quest to unify the population. In my mind’s eye, I imagine him making a declaration like this:

“Mr Lincoln, whose monument sits behind me tonight, presided over our country at its most divisive moment—the Civil War. When this long and bitter conflict subsided, the president declared that our better angels had triumphed, and that we would go forth as a single nation. Today, I say to you that we must once again work across geographical and party boundaries, for the good of this one great land…

“In the spirit of Lincoln, I ask both Republicans and Democrats to join me in that effort. And to those pessimists among us who see the current era as one of unprecedented acrimony among the various factions, I would simply encourage them to have faith in their fellow citizens, and to allow our better angels to win the day once again.”

Beyond citing Lincoln’s words, President Biden could also refer to his 19th century counterpart’s career as a champion of open-mindedness and compromise. In fact, there are some broad parallels between the journeys of the two presidents, as each one spent years engaging adversaries in debate and decision-making.

Abraham Lincoln lived during a time of lively debate and fierce disagreement among political factions. Even in that environment, though, Lincoln was nearly always successful at convincing his opponents to get beyond their differences and to act for the greater good. Famously, he even put many of his fiercest opponents, people who had run against him for the presidency, in his cabinet.

Joe Biden can thus tell the story of a Republican legend and symbol who spent his life in politics working in concert with his political enemies. He can speak of America’s long past as a land of free and open debate, but also one where those who disagree on public policy treat each other with respect and dignity.

And, Mr Biden has the advantage of being something of a modern-day embodiment of Lincoln’s ideal. He can indeed reference his own vast experience as a legislator and vice-president. In each of these environments, Biden was well-known as an exceptional listener, an open-minded man of compromise and civility.

Admittedly, in today’s polarized world, it is difficult to be optimistic about Joe Biden’s chance for success in forging bipartisan cooperation. On the other hand, I am convinced that he could advance his cause, and perhaps even inspire change, by invoking powerful national symbols such as Abraham Lincoln.