Lessons from the breastfeeding protest in Argentina 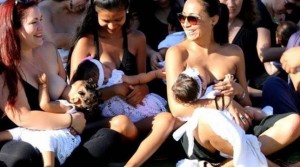 She walked calmly through the crowd, smiling as thousands of women nursed their children, in the very same place where she had been harassed for nursing her child in public. Support from all corners of society turned out to be far greater than Ms Santos had ever envisioned. Prominent attendees in San Isidro included 1980 Nobel Peace Laureate Adolfo Pérez Esquivel, and Victoria Donda, a member of Congress who had famously breastfed her child in legislative sessions.

Similar protests unfolded throughout Argentina, in such cities as Mar del Plata, Tucuman, Rosario and Neuquen. There was even a “teteada virtual” for those who could not attend in person.

Ms Santos’ story prompted the following official statement from the local government: “The San Isidro Municipality considers public breastfeeding to be something that in no way contravenes any law of any kind. The Municipality would also like to remind the public that the San Isidro Maternal Municipal Hospital has been certified by Unicef as a ‘friend institution’ for mothers and children because of its widespread promotion of breastfeeding…” In addition, San Isidro’s mayor, Gustavo Posse, used his Twitter account to express support for Santos: “I send my solidarity to the mother who suffered this incident. San Isidro promotes breastfeeding as part of our municipal policies.”

During my final weeks in Buenos Aires, I was pleased to follow the story of Coni Santos, and to observe the outcome. It is an event that demonstrates one of my favorite leadership teachings: We all have more influence in our worlds than we believe, and we can bring this influence to bear by taking stands on the issues that matter to us, whether large or small.

Of course, one cannot expect that many of our stories will have the broad impact of Coni’s. However, the point is not that we should all try to change the entire world, but rather that we all have the capacity to influence our worlds. Whatever the context you seek to influence—your workgroup, sports team, charitable organization, family, or simply a group of friends—your willingness to take a stand and tell your story can indeed be a powerful vehicle for change.

To me, that is the most interesting lesson of the breastfeeding incident and its consequences. We all have a larger voice—greater possibilities for influence in our worlds—than we believe. And, we can all learn to exert this influence by practicing taking our stands and telling our stories.

Two further learning points are worth noting. First, the Internet, particularly through social media, provides a remarkable amplifier for the voice of any individual. As such, we have a tool for reaching out and spreading messages, a tool that has never before existed.

Second, in the Internet Age, one cannot predict how far any story might go, or how large a reaction it might generate. Consequently, I have long encouraged individuals—my clients, students, seminar participants, and the world at large—to take the lead in influencing their worlds. Leadership means having the courage to take our stands for the things that truly matter to us, to speak from the heart, and to tell our stories.

In today’s world, ordinary individuals have far greater possibilities for influence than ever before. By taking her stand and telling her story to the world, Coni Santos certainly had a wider and deeper impact than she ever could have imagined.

Next time, we’ll take a look at another remarkable event generated by an everyday individual, someone who simply took a stand and told his story.