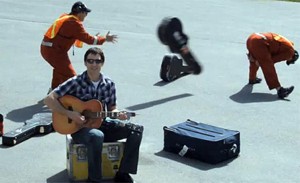 In 2009 and 2010, when I was spending much of my time researching and writing the book The New Marketing: Social Media, Email, and the Art of Storytelling, one of the truly outstanding stories I came across was that of Dave Carroll. At the time, I was working as a consultant for several spirited internet start-ups, and speaking at 20-30 technology and marketing conferences each year. As such, I had access to a large number of narratives about how technology was changing the rules of the marketing game, for companies and individuals.

In my work and travel, one of the specific kinds of examples I looked for were those that demonstrated the power of this new dynamic—the novel possibilities that individuals had to influence their worlds. As the tale of Coni Santos from the previous post illustrates, an ordinary individual who stands up for something, tells her story, and finds a voice on the internet, can indeed have an enormous impact in her world.

Dave Carroll’s story was one of the early ones I saw that pointed out very clearly how much the rules of communication were changing in the Internet Age. Though moderately successful in the world of popular music, Carroll was a relatively unknown Canadian singer and songwriter, until an incident with United Airlines would change his destiny. His saga shows how such an individual can have the power to turn the tables on a large corporation, in ways that were simply not possible prior to widespread popularity of social media.

In the spring of 2008, Carroll’s band, Sons of Maxwell, traveled to Nebraska for a one week tour. As the passengers awaited take-off, a woman sitting near Carroll exclaimed in horror: “They’re throwing guitars out there”, as she observed the baggage handlers on the tarmac. Upon arrival, Carroll discovered that, in fact, his $3500 Taylor guitar had been severely damaged.

United never formally denied the facts of the case, but for nine months they refused to compensate the musician. Each employee that Carroll contacted put the responsibility for dealing with the damage on someone else, and the company turned a blind eye (or a deaf ear) to his demand for a settlement. After so many months of getting nowhere, Carroll abandoned his quest. Rather than fight further, he told the last United employee he spoke to that he would write a series of songs about his frustration, along with online videos for the world to see.

The first of Carroll’s “United Breaks Guitars” videos was posted to YouTube on July 6, 2009. In an effort to spread the message, he had told a number of friends about the launch, and they began tweeting, sharing on social media sites, and informing bloggers of the event. The response, though, was far greater than any of them could ever have imagined.

Overnight, the tune and film turned into something of a viral phenomenon. Within three days of its release, the video had been viewed 466,000 times. The song hit number one on the iTunes Music Store in its first week on the market. Coverage soon spilled over to traditional media; CNN and the BBC reported the song’s surprising instant success, and the embarrassment it was causing for United. Within a month “United Breaks Guitars” had been viewed 4.6 million times.

Personally, Dave Carroll reached levels of fame beyond anything he could have hoped for. Here are some of the things that happened in the months and years following the release of the songs:

—Sales of Sons of Maxwell’s eight albums and Carroll’s solo discs increased from one or two a day online to several hundred, according to the singer.

—Bob Taylor of Taylor Guitars personally telephoned, offering two guitars of Carroll’s choice, and props to use in a second video.

—Other airlines have offered Carroll free travel so that he might experience their customer service.

—Since the incident, Carroll has a new career; he is in great demand as a speaker on customer service.

—In January 2012, “United Breaks Guitars” was featured in the CNBC documentary “Customer (Dis)Service”.

—In June 2013, the NBC TV used the videos as part of a panel discussion on “how to properly complain and get what you want”.

—In January 2013, the success of Carroll’s online protest was used on German national television to illustrate the power of individuals, and a new kind of threat facing corporations, in the Internet Age.

Of course, Dave Carroll’s story is an extraordinary one, and we do not see such viral events happen very often. Nonetheless, this incident does demonstrate that today’s internet technology provides opportunities for everyday individuals—with the right combination of creativity and luck—to take their stands, and to have an enormous impact in their worlds.