Standing against is less effective than standing for

Standing against is less effective than standing for

Standing against is less effective than standing for
Posted on January 13, 2017 in Leading by autobiography, Storytelling 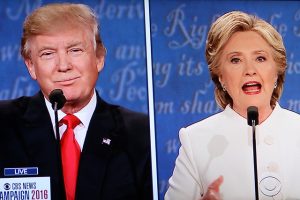 As mentioned in the previous post, I would not claim to be a fan of either candidate in the recent United States presidential election. At the same time, I did catch some of the news coverage when I was in the US, and I was rooting for each of them to use a type of discourse I have been studying and teaching for many years.

My research and coaching experience of two decades have taught me that we are simply more effective at influencing others when we speak from the heart about who we are, what we stand for, and how we see our shared future. Consequently, I look for this sort of declaration from public officials—statements that express who they are and how they see themselves guiding our society toward worthy objectives.

Of course, I understand that politics is unsavory business, and that this campaign in particular sank to unprecedented depths of negativity. Nonetheless, I firmly believe that Hillary Clinton would have benefited from maintaining a more positive posture, one with increased emphasis on her own life lessons and convictions. As I express frequently to clients and students in my daily activities, we do not influence others by merely standing against things. We must also connect with our listeners by providing them uplifting propositions borne of our core beliefs and values.

Though I consider myself a less-than-avid observer of politics, I did watch some of the the debates, looking to see if Mrs Clinton would give the public a clear picture of precisely what she does stand for. Unfortunately, I was left with the distinct impression that she did not do this very effectively.

In the news clips and other declarations I saw, it seemed that Clinton was constantly trying to make her opponent’s character flaws the central issue. My feeling was confirmed by a report in the Financial Times, which stated that three-quarters of the Clinton campaign’s television ads aimed squarely at Trump’s negatives—his treatment of women, his attacks on minorities, or the inconsistencies in his messages.

From my perspective, relying so heavily on attacking Trump’s past missteps and disrespectful conduct was indeed a substantial tactical error. In the end, she spent so much energy standing against her opponent that she failed to speak convincingly about what she herself stands for.

Now, let me be clear. It is not my contention that she should have avoided negative attacks completely. What I do believe, however, is that Hillary Clinton would have been better served by taking the “high road”. And, from what I could see, she missed numerous opportunities to do so. There were a number of occasions where she had openings to demonstrate that she indeed stands for something, to shine light on a favorable aspect of her identity, or to tell something of her relevant life experience. Instead, she most often chose to hammer away at Donald Trump’s character issues.

To illustrate my point, here is an example of one such missed opportunity, from the first of their debates, in late September. Near the end of this session, Mr Trump attacked his opponent as lacking sufficient “stamina” to perform the tasks of the president. To me, this was a perfect moment to showcase her experience, and to demonstrate a facet of her character.

When they were engaged in their exhaustive preparation for the debates, Mrs Clinton’s advisors must have anticipated that the stamina issue would arise. Personally, I would have encouraged her to counter such comments with anecdotes from her life experience. For example: “Let me tell you what I learned about stamina in the long days and nights when we were devising the strategy to get Osama Bin Laden, and when we were executing our plan.” From there, she could have proceeded to give a personal account of the learning from such a pertinent diplomatic experience.

Rather than tell a story from her past, one that might show her character, her stamina, or what she learned about the world during her stint as America’s top diplomat, she chose once again to shoot back at her opponent’s improper conduct of years past. She began, “This is a man who has called women pigs, slobs and dogs…one of the worst things he said was about a woman in a beauty contest…he called this woman Miss Piggy, then he called her Miss Housekeeping because she was Latino. Donald, she has a name…”

To my mind, dwelling so much on the negative, and not using her chances to tell the world the positives about her own character—what she stands for, how she learned her life lessons, where her values and beliefs come from—may well have cost Hillary Clinton this election.