The art of reframing any type of work 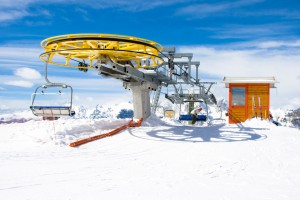 When we have a certain framework running around in our heads, it tends to shape the way we look at just about everything. As will come as no surprise to anyone who has been reading this blog, one of the frameworks in my mind these days has to do with seeing the work of the entire world on three levels. When I watch someone laboring at anything, I cannot help but observe the clues that help discern whether the individual’s mindset is that of a stone breaker, a wall maker, or a cathedral builder.

Even in my leisure time, I seem to ask myself this type of question although I am not at all looking to do so. Case in point: A ten-minute walk from my house in Switzerland sits a small, picturesque ski area with five lifts. Whenever I can, I go there at some point in my day, ski for an hour or two, and walk back home. As such, one of the phenomena I have an opportunity to witness is how each lift operator approaches the job. Since there seems to be a good deal of rotation among these workers, I have seen six or seven different people operate the same chairlift at various points of the season.

Some of the people performing this function seem to see their role as simply keeping everything running. They do what is needed to assure that their locales stay clean and efficient. They spend much of their time in their small cabins next to the lift, interacting little with customers, and generally only emerging when there is a problem to resolve. To me, they are efficient workers, getting the job done, but we could perhaps compare them to the rock breakers in the cathedral tale.

Then there are a number of lift operators whom I would put in a second category; they seem to take pride in doing things that go beyond the basic list of responsibilities. They are outside their cabins more than inside, and they try to make boarding the lift as easy as possible.

For example, they move soft snow to cover the icy places where skiers might slip and lose their balance. They are attentive to people’s problems and ready to help anyone having difficulty. I consider them to be wall builders, simply because they have moved beyond task orientation, understanding that they play a role in contributing to the visitors’ overall well-being.

For a third group of lift service personnel, interaction with clients seems to be an integral part of the job. They are constantly outside by the entrance to their lifts, managing the flow, drawing skiers into conversations, asking them about the conditions, smiling and joking with young people, or giving families advice about riding the lift with children.

A few days ago, I was so intrigued by one of these active employees that I engaged him in a conversation about how he views the work he does. “You’re always so positive with people, never down about anything, and it is such a pleasure to come by here and see you working. What motivates you to do your job this way?” I asked. He responded quite simply that he saw it as part of his role to make sure that people were enjoying themselves and wanted to come back again. When he helps them have a good time, everybody wins: clients go home satisfied, his employer is more successful, and he feels good about the way he spent his day.

So, what is my point about all this, other than my own fascination with seeing all the world’s jobs on three levels of commitment? Here are three of my conclusions.

First, people in my audiences have often asked how the “cathedral narrative” can be applied to service businesses, since these companies do not actually build anything. I would argue that the lift operator with whom I spoke the other day sees himself as helping to build a cathedral, in the form of an extraordinary customer experience.

Second, I am increasingly convinced that any task, even the most mundane, can be reframed to give the people who do it a broader perspective and a sense of greater purpose.

I cannot be sure if the ski-lift operator with whom I spoke sees any form of cathedral in his mind. We do not know if it was a manager who inspired him to go beyond the formal requirements of the job, or if he simply took it upon himself to do so. In any case, he has come to view his role as something bigger and more meaningful than his daily assignments, and he does far more than what is required.

And finally, it all brings me back to one of my fundamental beliefs about our role as managers. Most people would like to find some kind of meaning in their work, so one of the best things you can do for them is put them on a journey of purpose. Whether this means telling a story of building a cathedral, creating a product that will improve the world, or simply providing a customer experience that people will talk about, the narratives we create and co-create are our most powerful tool.