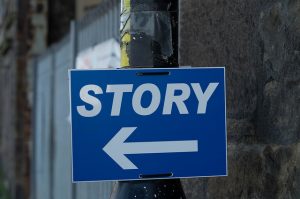 In the previous post, I discussed how Margaret Thatcher told personal stories of identity—particularly those from her solid middle class upbringing—throughout her illustrious political career. As a candidate in the 1970s and 1980s, she spoke often of the lessons learned and values gleaned from her childhood, as she sought to convince Britain’s working classes to buy into her vision for their struggling nation.

When I was a beginning doctoral student in Newcastle, I read extensively about Mrs Thatcher’s use of storytelling, so much so that I consider her one of the most effective practitioners of a rhetorical device I came to call “leading by autobiography”. At times, I think of Lady Thatcher when I watch modern day office-seekers trying to connect with voters. On some of these occasions, I even wonder how the adept Iron Lady would have responded to a query in a debate or interview.

As such, Margaret Thatcher did come to mind on occasion, as I observed Hillary Clinton’s unsuccessful run for the US presidency in 2016. One of these instances was during an astonishing exchange between Mrs Clinton and Chuck Todd, moderator of the popular Sunday morning talk show Meet the Press. Their conversation unfolded this way: Todd: “If you could sum up, what is the big idea of your candidacy?”

To me, Chuck Todd’s inquiry is a fairly common one; any candidate should be ready and well-prepared to address it. In essence, the interviewer was asking Clinton to delineate clearly who she is and what she stands for. As someone who has often coached speakers to handle this type of situation, I found her response remarkably vague, and devoid of substance.

It was this sort of bland, listless, imprecise prose that characterized Mrs Clinton’s discourse throughout the campaign, at least what I saw of it. On this and a number of other occasions, I thought she missed opportunities to lead by autobiography, to tell something of her core beliefs, the lessons of her upbringing, or the things that deeply matter to her. Since she told no personal stories, she did not show us much about who she is or what she stands for.

The more I reflect on moments like this Meet the Press interview, and the more I discover about Hillary Clinton’s background, the more I am convinced that she could have used her “solid middle-class upbringing” to connect with potential voters. Using Margaret Thatcher’s approach as a guide, I imagined a different style of response for Mrs Clinton. For example, she might have said something such as:

“You know, Chuck, I have had an interesting career in public life, and I’ve been fortunate to have some major roles on the national and world stage. At the same time, I try never to forget where I come from. At my core, I am a middle class girl from the middle of the country. My family’s neighborhood was filled with modest, hard-working people, the type of people who are truly the backbone of America. My father, for example, had a small drapery business…”

Of course, I can only imagine what such a response might have been, since I have only a sketchy knowledge of Hillary Clinton’s upbringing. Nonetheless, in my mind I saw her doing what Mrs Thatcher would have done—using stories from her “ordinary” upbringing as the basis for her connection with mainstream voters.