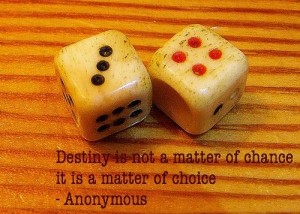 There is a potential drawback to using the stories of great men such as Gandhi when I teach a seminar or work with middle managers in companies. People sometimes react by commenting that such examples are interesting but far removed from their realities. How much can we take the lessons of men and women who have truly changed the world and apply them to our day-to-day lives and jobs?

So, I do ask myself at times if it is perhaps too much of a “stretch” to think that middle managers can utilize lessons from important historical figures as they go about their daily business. After some thought, though, I have come to believe that it is not a stretch at all. In fact, we can all use the example of Gandhi to reflect on and process our own life experience. Here’s why:

When Gandhi made his decision to lead on that fateful night in South Africa, there had been nothing remarkable in his prior life that would have foreshadowed his emergence as a person of such astonishing influence on the world stage. At that moment, he was an ordinary man –like any other man of color living in South Africa at the time– who decided to stand for something he believed in. As such, Gandhi’s experience in South Africa is a clear substantiation of the notion that leadership often begins in small ways, with our simple choices and actions.

At the time of his decision, Gandhi certainly had no grand plan to change the world, and he had no large audiences that would listen to him.  He simply began speaking to a few friends and relatives about the unfairness he had encountered in South Africa.

As I often tell middle managers and seminar participants, our daily lives frequently present us with straightforward moments where the same three paths that lay before Gandhi also lie before us, even in the most common and mundane of situations. For example, if we are involved in any type of project—or even when sitting on a committee or doing volunteer work—and the group is not functioning the way we would like, we should learn to see these situations as choices among the paths.

What I have found in working with a wide variety of individuals for the past two decades is this: When we learn to view these situations as opportunities to shape our own destiny, it turns us into active deciders rather than passive bystanders. By changing our perspective, we come to realize that, in cases where something matters deeply to us, we can indeed choose…

So, what do we learn from the experience of Gandhi, beyond our analysis of the three paths? And, most importantly, how do we apply all of this to our lives? Let’s focus on what for me are the two most critical lessons.

The first lesson is about developing our capacity to lead from wherever we sit within an organization: Remember that leadership often starts with a simple decision. We have opportunities to take stands all the time, in our day-to-day choices. Indeed, if we begin small—by seeking to change what we can within our sphere of influence—we never know where it might take us.

Most managers tend to think of leadership far too much in terms of grandiose events and momentous decisions, things that are just not a part of their worlds. Gandhi demonstrates that it often begins with choosing to take a stand about something in one’s daily context.

My second piece of advice is to find ways to build reflective time into our daily routines. It is in our reflective moments, and in our learning from them, that we define ourselves as human beings, and as leaders.

In the end, what happened to Gandhi on one train journey in South Africa was far less important than the personal reflection it stimulated. It is in our reflective moments that our self-knowledge grows. We come to understand the causes for which we are willing to take a stand. As we learn to process our life experience with heightened self-awareness, we come to a deeper understanding of what truly matters to us.