More on the three paths 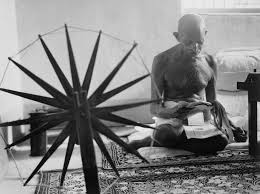 When I teach about the three paths we often have before us (discussed in the previous post)—to leave, accept, or master your context—I sometimes illustrate the concept with a transformational event from the life of Gandhi.

The reasons I keep coming back to this particular story are several. First, Gandhi’s experience refutes one of society’s great myths about leaders, that they have some sort of natural or divine gift. Second, the choice Gandhi makes one day in South Africa shows that extraordinary leadership often begins when an ordinary person makes the simple decision to take a stand. And third, Gandhi’s situation is is a clear illustration of the three paths we discussed in the last post.

Gandhi’s leadership was clearly not the result of some divine gift. In fact, there is nothing about Gandhi’s early life that would lead one to believe that he was born with a special talent. A competent but not brilliant student, he was educated in law at University College, London, and admitted to the British bar in 1891. At 22 years old, he returned to India and attempted to establish a law practice in Bombay, with little success. In 1893, he accepted a job as legal advisor to an Indian firm in South Africa.

It was the way the young Gandhi processed his life experience that would change his outlook and lead to his becoming a remarkable person of influence in the world. Seven days after arriving in South Africa from India, Gandhi travelled on business from Durban to Pretoria, on a first-class ticket.  At Maritzburg, when the beds were issued, guards came and turned him out, at the instigation of a white passenger, purely due to the color of his skin.

Gandhi recounts that he watched the train steam away as he shivered in the evening chill, afraid for his life. He remembers the cold, and his fear of a big white man in the waiting room. Gandhi asked himself that night if he should go back to India, or if he should stay and go forward with his work. In the end, he decided that he should remain in South Africa and get involved in ways that would promote change in an unjust system.

Gandhi’s decision to take his stand, to stay and fight for justice, led to a 21-year quest for the rights of Indians in South Africa. Of course, with hindsight, we understand the importance of that decision, and of Mahatma Gandhi’s leadership in the world. But, on that cold night in Maritzburg when he was thrown out of the train, Gandhi was a fearful, shivering young man, an everyday individual who made a choice.

I use this simple story to demonstrate a point about leaders, context, and decisions.  At the moment he decided to lead, Gandhi had the three possible paths before him.  He could have chosen to leave the context, in this case to return from South Africa to his homeland of India. He could also have surrendered to the context, recognized the reality of apartheid, and chosen to go about his work and live his life there nonetheless. Or, he could decide to remain in South Africa and take a stand against what he saw as an unfair policy. In other words, he could choose the most challenging path, that of attempting to exert his influence on the context.

Even though he had no formal power to change anything, Gandhi chose to do his best to master the context, to set out on a quest to influence a firmly entrenched system. That decision would make all the difference, first for the man and later for the world.