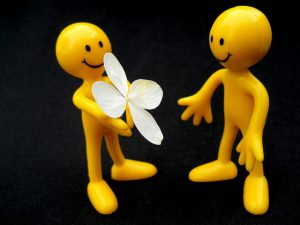 In a post called “Stories and remarkable service”, published on June 28, I wrote of the extraordinary service I have often experienced at JW Marriott hotels around the world. When I arrived at this hotel in Lima last month, I was thinking in particular about a remarkable personal greeting I had received at the JW Marriott in Dubai in 2016.

On that occasion, a woman named Sara had taken the initiative to meet me at the door, and to show me to my room. What struck me in particular about this noteworthy touch of service was that it was not hotel policy to do it. Rather, it was one employee’s decision to provide a truly exceptional customer experience. She had simply noticed that I was arriving on a long overnight flight, and she had made the choice to come greet me completely on her own.

To me, it was an unusual event, one that made me curious about the sharing of stories among Marriott people. Were there stories of “heroic” client service that circulate among employees?

Arriving at the front desk at the JW Marriott in Lima, I happened to ask the woman who checked me in if she knew any stories of customer service from other hotels. Not only did she know some, she also handed me a 70-page booklet entitled “Spirit to Serve”.

This little book contains some two dozen recent anecdotes from a diverse collection of Marriott associates. They come from hotels in all parts of the world, and the protagonists are people from every level of the company. While these tales told of a wide variety of incidents in diverse contexts and cultures, a number of them had two common themes—attention to detail, and individuals taking the initiative.

One of the reasons I picked up the book and read it with considerable attention is that Marriott is no ordinary corporation. Each year, they are cited in numerous surveys as one of the best places to work in America. On my flight to Lima, I had just read the March 2017 issue of Fortune, which named Marriott a “Legend Company”. Such a distinction was awarded to the 12 organizations that have appeared on the magazine’s “100 best” list every year for the past two decades.

Like the other legendary companies from the Fortune piece, Marriott has long committed to treating its people exceedingly well, on the belief that happy and fulfilled employees will provide top quality service to the guests.

The booklet “Spirit to Serve” opens with a foreword from legendary former CEO Bill Marriott, who ran the company for 40 years until he stepped down in 2012. Today, at age 85, he continues to serve as Executive Chairman and Chairman of the Board.

Mr Marriott’s preface is a story about the power of story. As he recounts, when he began speaking at business conferences, he asked for advice from the best speechmaker he knew: his father. What he wanted to learn was how to prepare for all the questions he was anticipating about the company’s strategy and performance.

His father had a simple answer that would prove itself true again and again during the son’s long career: “Bill, that stuff doesn’t matter to people. All they remember are the stories.”

During Bill Marriott’s long tenure as chief executive, the company became exemplary in both its story telling and story sharing. One result, I thought, was the impactful little book I held in my hands that night. As I turned the pages looking through the stories and photos, one tale that caught my eye was that of Hamdy Khalafalla Mohamed, now a bakery chef at the Cairo Marriott Hotel.

Twenty years ago, he was a poor, industrious young man who decided to write to all the five-start hotels in Cairo, asking for work. Only the Cairo Marriott Hotel invited him to come for an interview. He was hired for his attitude, and he soon volunteered for the task of cleaning the hotel’s garbage room. This huge hotel has 1250 rooms, and tons of garbage. Not only did he keep the large facility impeccably clean and organized, he also took it upon himself to sift through the garbage on his own, looking to salvage lost silverware and china.

One day his boss noticed him in the street, picking up litter left by passersby near the hotel entrance. When the boss asked Hamdy Khalafalla Mohamed what he was doing, he replied that for him it was important to clean the area around the hotel. “If our guests see the streets are dirty”, he said, “they might think our hotel is dirty.”

Over the years, Hamdy Khalafalla Mohamed developed his skills, moved on to various positions, and ultimately became a bakery chef, a job he performs with the same eye for detail and commitment to excellence.