A result that surprised nearly the entire world

A result that surprised nearly the entire world

A result that surprised nearly the entire world
Posted on November 17, 2016 in Leadership 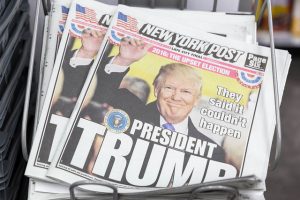 As I continue to research Southwest Airlines, and I do plan to write more about their culture and people policies, the events of this week seem to warrant some type of reaction. In fact, for the past nine days, I have surprised myself, simply by remaining engrossed in a political event and its aftermath. Of course, I am referring to the election of Donald Trump as the next president of the United States.

While I am usually not more than a casual observer of presidential campaigns and election results, this time seems somehow different. Though I was not a partisan of either candidate, I nonetheless found myself spending a good deal of time reading and watching the coverage, trying to come to grips with the implications of this unprecedented vote. For better or for worse, it feels as something historic is unfolding before our eyes.

Apparently, I am not alone in feeling that this election may be a veritable watershed moment. When moderator Chuck Todd welcomed the television audience to his popular show “Meet the Press”, he took a deep breath and exclaimed: “This is no ordinary Sunday.” Political commentator Edward Luce wrote in the Financial Times that “for once the word seismic is merited.” New Jersey democratic senator Cory Booker said that this was “an election like I have never seen before”, an indication of deep discontent with both parties, and with the ways of Washington in general.

There were also alarming warnings from allies abroad. For example, Former Swedish Prime Minister Carl Bildt made this perhaps overly dramatic remark in an interview with CNN: “It’s the end of the West as we know it.”

Why is this election such an extraordinary phenomenon? For starters, this unlikely result has shaken the American political landscape, right down to its core. In the course of the primaries and the general election, Mr Trump destroyed two dynasties—the Bushes and the Clintons—the most powerful families in each of the major parties. Now he threatens to completely disrupt Washington, to “drain the swamp”, as he is fond of saying.

To use the language of business, this is far more than a mere victory. It is a hostile takeover of an entire firmly entrenched system.

This real estate mogul and political neophyte defied convention in just about every respect. He spent virtually nothing on television advertising, used a skeletal staff by traditional campaign standards, and allocated far fewer people and resources than his opponent to presence “on the ground”. Instead, he relied heavily on the star power of “brand Trump”, an army of Twitter followers, and his ability to excite crowds with a simple message: “Make America great again.”

To me, this surprising election result raises a number of intriguing points that will be worthy of comment. In addition, some of these issues are directly or indirectly related to the work I do in the realm of leadership and personal storytelling.

Here are some of the questions I am contemplating, and which may provide fodder for posts in the coming weeks:

What are the implications for the future of political discourse? Have we indeed entered an age of “post-truth”, where objective facts are less influential in shaping opinion than appeals to people’s emotions and beliefs?

What role does—or should—social media play in modern politics? There are at least two aspects of this question worth exploring. First, Donald Trump’s use of Twitter with his millions of followers may have made more of a difference than most observers believed. And second, there is a budding controversy over the role of social media, Facebook in particular, in the propagation of fake news stories. To what extent should social media sites be responsible for the content spread by the users of their platforms?

Where did the Clinton campaign, and the mainstream media “experts” go wrong? Again, I am far from a political pundit, but my interpretation of the events is perhaps worth considering; it is strikingly different from what I have seen and read in the post-election media coverage. Not surprisingly, there is a storytelling angle to my analysis, one that we will explore a bit next time.